Without illnesses and woe

The terrible diagnosis which is put to kids from Makeevka's children's home for HIV-INFECTED children, practically does not leave them a chance 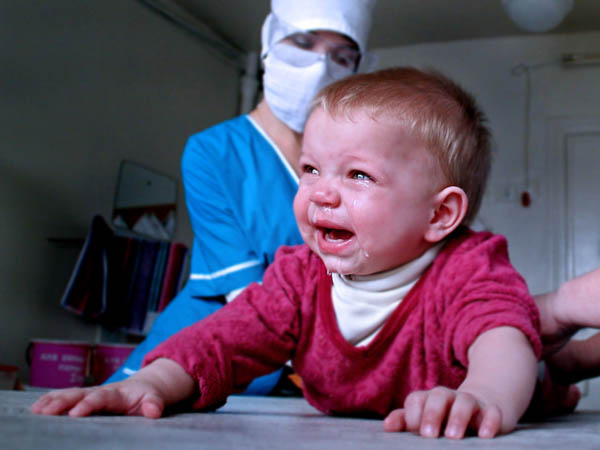 Perhaps, the terrible diagnosis - a HIV - will pass the kid

Clearly, all children without exception needs attention and care of the state. But nevertheless there are children who needs it more the than the others. One of them is the hero of a photo of Sergey Vaganov "Injection " which has received one of the first prizes at photo competition of "Day" in 2006. This picture has excited many of our readers, and they have asked edition to tell about this kid, children's home where he lives, and how he can be helped.

The photo has very touching history. There is a kid on a picture, who recently has no future because he has been doomed since the birth. The terrible diagnosis which put to kids at children's home for HIV-INFECTED children and children sick of AIDS, that is on Donechina, practically does not leave them chance, however doctors use the best efforts in order that their small patients have not simply survived, but also have received a normal high-grade life and have been well-groomed.

Everyone at Donbass know this Children's home. It has appeared here in 2001 on the basis of children's sanatorium, and recently, unfortunately, only fills up number of the patients: if in the beginning them was only 40, already 85, and there are all preconditions for increase this figure. Alas, in Donetsk area parameters of the HIV-INFECTION and disease of AIDS recently only grow. Now Donbass takes the fifth place in Ukraine in spreading of this diagnosis, doctors recently are inclined to assert, that in region it is possible to fix the beginning of epidemic of AIDS. In particular, according to regional management of public health services, parameters of distribution of a HIV in region (245,9 patients on 100 thousand population) almost twice exceed an average index across Ukraine (115,5 patients on 100 thousand population) already for a long time . Moreover, the special tragedy, according to the words of the head physician of the Donetsk regional center of preventive maintenance and struggle with AIDS Nikolay Grazhdanova's, is that today this terrible illness "has appreciably looked younger": the majority of patients - young people in the age of 19-49 years, and the big part of that patients is also sick children. Certainly, doctors emphasize, that today they in a success in reducing the infection of children from HIV-INFECTED mothers on 30 %, however the total of infections is also very great. Moreover, very often mothers who have given birth to the potentially sick child, simply refuse him, leaving the kid to the mercy of fate.

All these children in a result get in children's home for HIV-INFECTED where they should live up to 4 years. The hero of a photo is one of them. He is the two-year-old kid who does not have parents, but who has a hope for recovery. According to the doctors, children of 1,5-2 years still do not have clear diagnosis, and may be, the illness will pass them. As a matter of fact, chances are very high - from hundred children only five in a result appear HIV-POSITIVE. Now all of them are on laboratory inspection which constantly traces a condition of their health. In total there are 42 such kids, and all of them receive necessary preparations to lower risk of infection as much as possible. At present there are 27 chest kids in Children's home who is not a year yet . Besides 29 kids is three years-old, and the others are at the intermediate age - from one year up to three. After four years all of them will be transferred to boarding schools where will study and live on the same level with other children. These children have no chances for adoption - in a history of children's home yet there were no cases when the HIV-POSITIVE kid would be adopted.

However, as Lyudmila Batihina, the assistant to the head physician of children's home has told to the "Day" , in the near future eight kids nevertheless will find family - they will be adopted by employees of children's home, which meaningly take away them to treat and bring up in home conditions. Besides three children have returned to the families which in the beginning have refused them - however for this purpose it was necessary to give a considerable work with relatives.

By L. Batihinoj's in spite of the fact that financing of establishment last years has a little increased, however means all the same do not suffice neither on medicines, nor on a meal. « The prices is growing, and if the last year we could live better on the allocated money, and to buy for kids a lot of all » now we need more money. Especially there are no means for a meal: HIV-POSITIVE children need on 30 % more fiber, so, it is necessary to buy more meat for them, that we, alas, do not presume », - she shares.

Similar happens with medicines - it is unconditional, there are enough sponsors in children's home, who help much, however their help all the same does not suffice. There is especially sad situation with the maintenance of the building which has been constructed in 1960. For example, if this year the children's home has still found sponsors to replace windows in a building, he affair did not come to the replacement of pipes and sanitary engineering, and now the personnel of children's home cautiously expects of the winter: if pipes will break from frosts it will be practically impossible to correct a situation .

And as a whole all structure became so shabby, that already simply demands of repair, replacement of pipes, and also furniture and the equipment inside it: there is completely non-equipped a fourth floor, and there is no furniture on all others , and the house desperately needs even the most elementary subjects of a life - children's stools, lockers for clothes and linen, beds. Therefore the children's home does not get tired to address for the help to sponsors if those only will express desire to help kids, because in fact it is not enough only state financing and the rare help on the part of separate Donetsk businessmen.

However, in spite of on anything, doctors do not despond. They managed to make practically a miracle. When children's home was created, considered, that children will not live a while longer several months, - they were sick and have been very much weakened, now it is 85 kids, who have quite steady immunity and which have almost stopped to sick, because they receive a maximum of that which is possible to make for them in such conditions

Certainly, now it is difficult to predict, what destiny will have of all these children who after four years, under the law, will be necessary to transfer in other establishments. And there is also a problem - it is very important to keep medical secret, having left in a secret the diagnosis of the kid, in fact it is not known, what will happen if this secret will be opened to their future schoolmates and coevals. Taking into account this fact, doctors of children's home today make all efforts to achieve prolongation of term of stay of children in this establishment, to give them an opportunity to study here, and pass necessary therapy in more advanced age. Meanwhile this question, alas, is not solved, however already doctors can approve with full confidence: no matter what kind of destiny they will have, they are not doomed any more, and they have all chances for a normal, worthy life without illnesses and woe.

Everyone who wants to help pupils of this children's home, can send money for the address:

This publication related with such categories:
Ukraine  Sick children of Ukraine  Publications with photos