On April 29, 2013, a concert by the residents of psychoneurologic group homes "Pure of Heart" took place in Zaporozhye 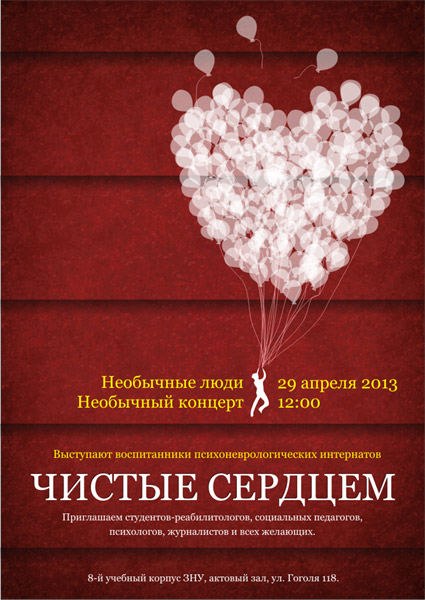 Many people have heard that there are orphanages and boarding schools for children who are orphaned, and some people have probably even helped them.

But there is another system, which is far less known - psychoneurologic group homes for adults. In the Zaporozhye region, a total of 1,970 people live in 9 such boarding schools. Most of them spend their entire life there. They are people with congenital disabilities (cerebral palsy, congenital cognitive impairment, hydrocephalus, etc.), people with psychiatric disorders (such as schizophrenia), consequences of injuries and illnesses, and different kinds of dementia, including the kind caused by drugs and alcohol.

This year, the "Helpus" project volunteers visited several of those group homes. We were touched to the heart by what we'd seen. Tens and hundreds of lives. So many talented people, who, despite their disabilities, can and want to participate in a creative process. Many group homes are located in far-flung corners of our region, and therefore, volunteers and charitable organizations rarely visit these institutions.

And that's exactly why we decided to organize a concert named "Pure of Heart". We invited those who are creative. The Federal Department of Social Work (special thanks to Andrey Kovpak) and the Department of Social Pedagogy and Psychology of Zaporozhye National University (special thanks to the Dean Olga Viktorovna Ponomarenko and the head of the laboratory Natalya Aleksandrovna Mamai) helped us to organize this concert.

And so, on April 29, 2013, at 12 noon, the auditorium of Building #8 of Zaporozhye National University filled with spectators. We must note that to fill up this big auditorium (400 seats) is not an easy task. But, despite our concerns, the auditorium was nearly full. The spectators were other residents of the group homes (about 100 people), students who major in social pedagogy and social work, journalists, and other caring people who came. 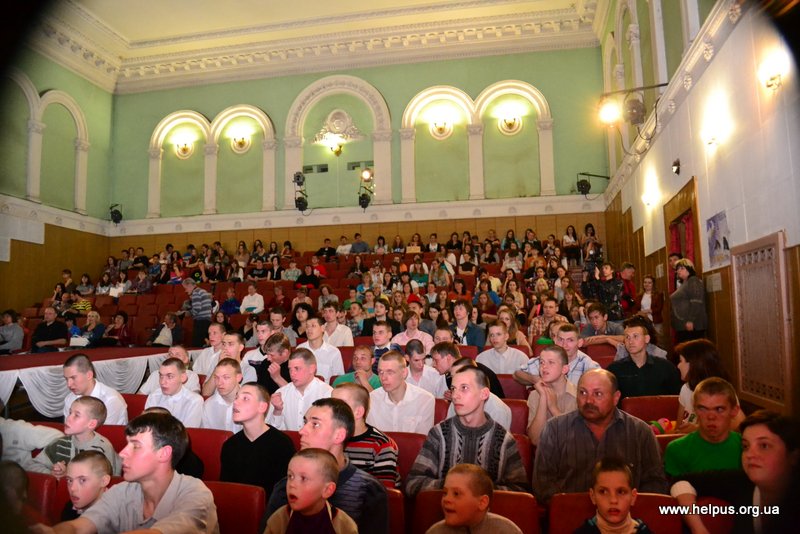 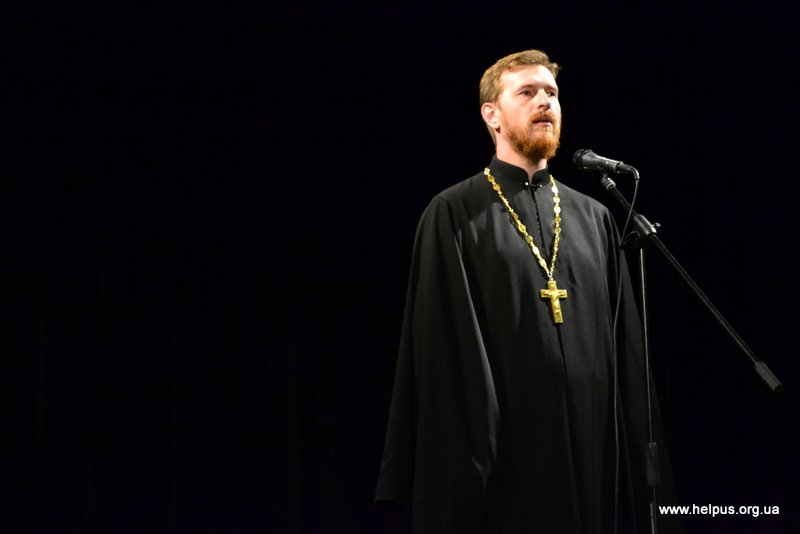 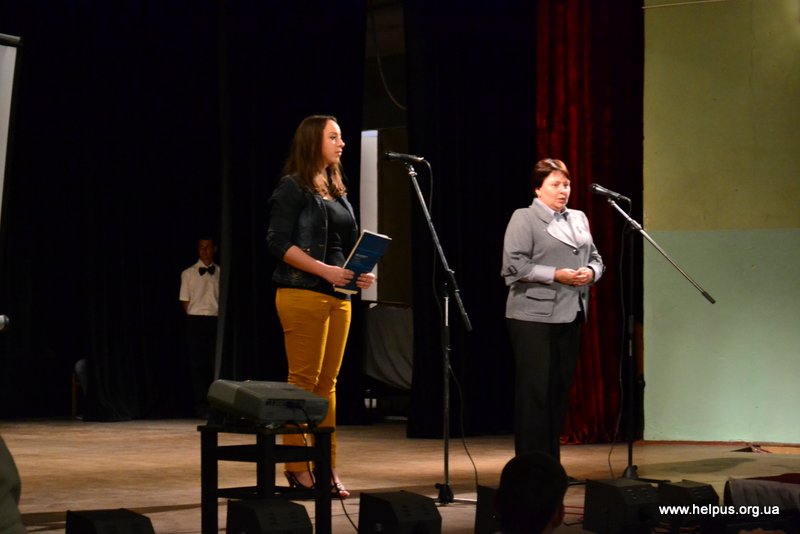 An introductory speech by the Dean of Social Pedagogy and Psychology Department of Zaporozhye National University, Olga Viktorovna Ponomarenko

In the foyer, those who came to the event could view the wonderful crafts and other items made by the residents of the group homes. And a few minutes later, both the residents and guests, young Zaporozhye artists, presented their numbers. Among the guest entertainers were Nikolai Bilyk, the grand prize winner of the regional contest 'Spadschina", Evgenia Averin, the winner of the international contest "The Stars of Adygei" and the grand prize winner of the international contest "Divosvit", and Dmitry Kuzmin with his rap composition "Children". 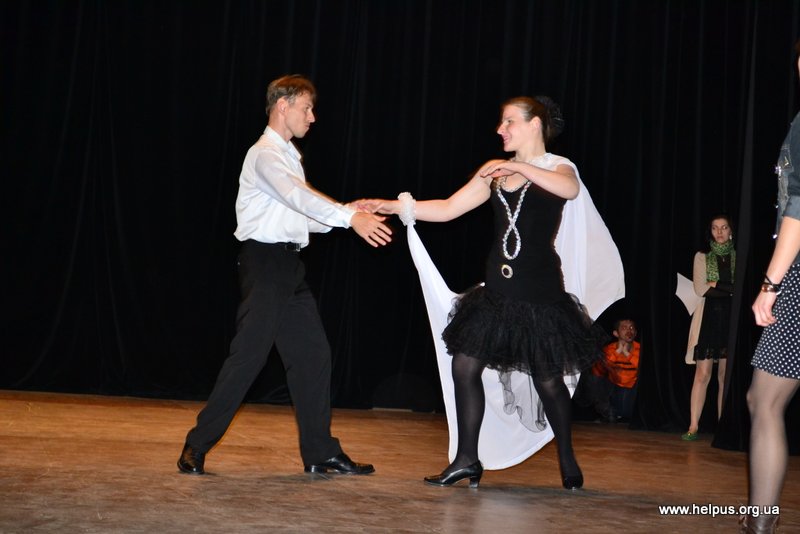 Next, Anatoly Lazarenko from Mikhailovsk Psychoneurologic Group Home took the stage. Anatoly has walked a difficult road, losing those dear to him, becoming stronger in spirit, encountering injustice and betrayal; despite losing fingers on both hands and having his limbs amputated, he managed to continue hoping for the best and has learned to love again.

Once, Anatoly had a dream about a windmill, and that is why he decided to make a model of a windmill, using matches and glue. And he used the empty matchboxes to make a robot. That's how he started making his wonderful creations. Furthermore, Anatoly began to write poetry. 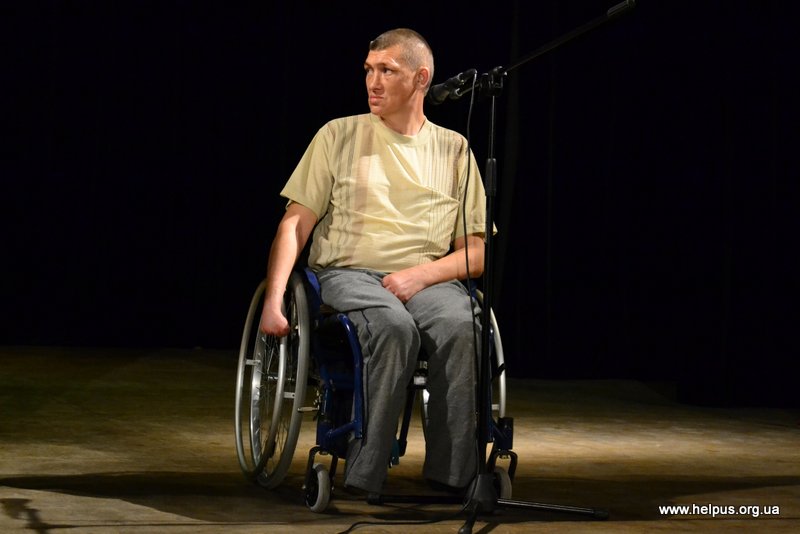 Anatoly Lazarenko from the Mikhailovsk Group Home makes crafts and writes poetry, despite not having fingers 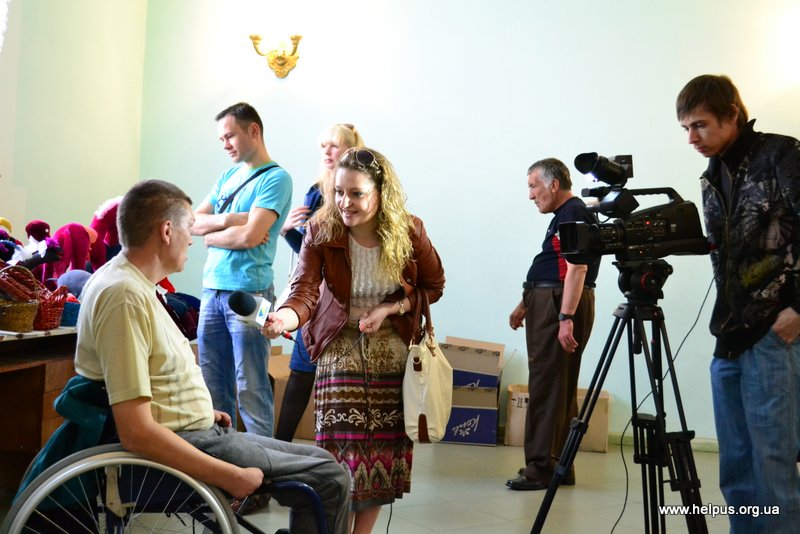 Anatoly Lazarenko gives an interview to the "Zaporozhye" TV channel 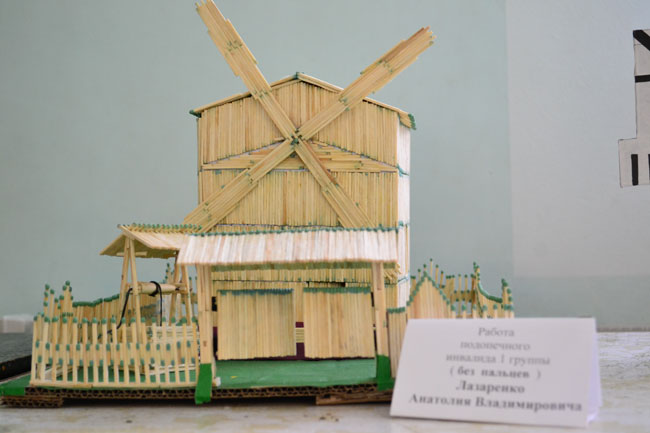 Once, Anatoly had a dream about a windmill and he decided to make a model of a windmill, using matches and glue

Next, the audience greeted with applause a poet from the Orlov Psychoneurologic group home, a person with a pure soul and a big heart, Vladimir Movchan. 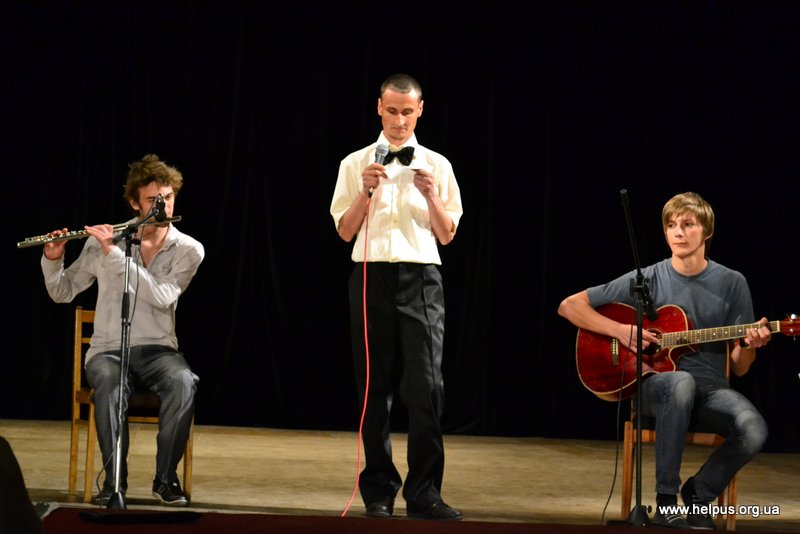 The young men from Kalinovka and Lyubomirsk group homes exhibited their crafts made of seed beads, which require diligent and meticulous work. When the emcee asked them what made them invest so much effort into those works, Sergey Polukhin from Kalinovka modestly answered,

"So that people would see me!"

Indeed, for many of the group homes' residents participation in such a concert is a hugely important event, a chance to believe in themselves and to feel emotions they'd never felt before. 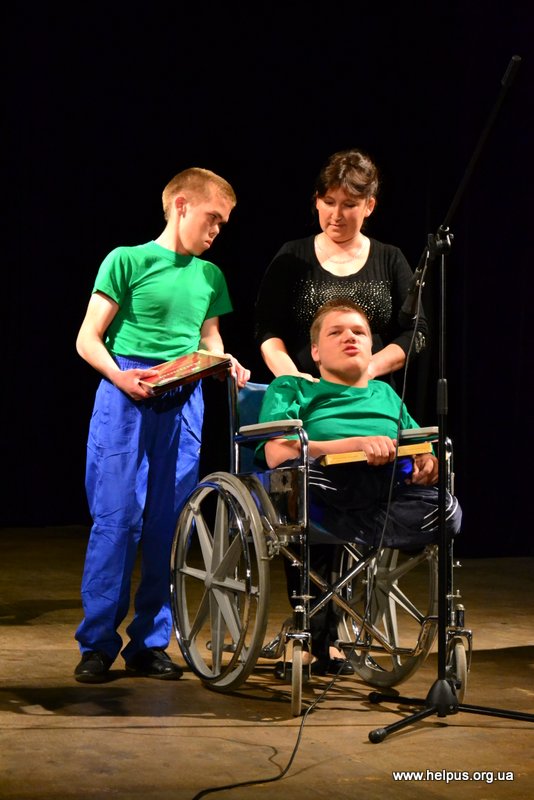 Sasha and Sergey from the Kalinovka group home make crafts out of seed beads, thanks to the volunteers' help. For the last several years, the two of them just sat for days on end, staring at the ceiling and at the white walls 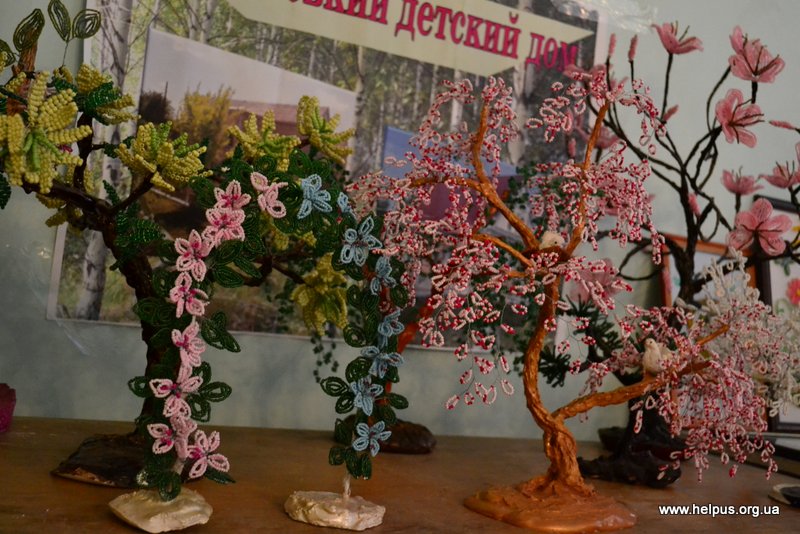 Seed bead crafts, created by the residents of Kalinovka and Lyubomirsk group homes

In the next number, the audience met a wonderful duet of two brothers, Ivan and Andrey Zolotarenko from the Velikiy Lug Children's Group Home. Incidentally, Ivan and Andrey have a twin brother who also lives in the group home.

In spite of all difficulties and privations, these boys have retained the most valuable thing - love for people and openness to life.

During the boys' time on the stage, a technical problem occurred, the DJ wasn't able to find the right music. But thanks to volunteers' help and with the public's applauding, Ivan and Andrey performed their song without music! 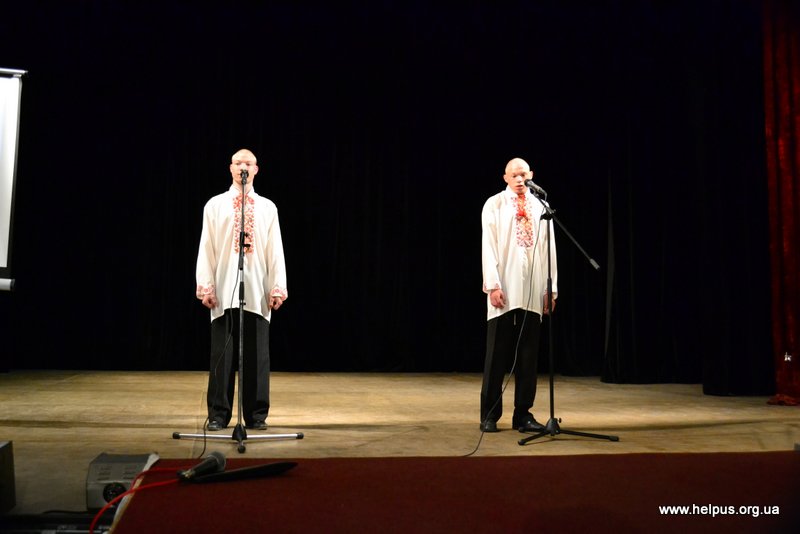 In the next number, Larisa Pershina from Preslavsky Group home was the performer. Larisa is a lively and cheerful person, petite but with a big heart.

Music has been a constant and faithful companion for our next hero. From childhood on, in the circle of friends as well as on the big stage, he's used to giving his listeners the gift of cheerful mood, playing sweet and happy accordion melodies. A representative of Orlovsky Group Home, Veniamin Viktorovich Vechnyi, pleased everyone with his mastery. And after the performance, "V cubed", as Veniamin Viktorovich calls himself, told us that, although in the last few years, he's been living 150 kilometers away from the regional center, his birthplace is the center of Zaporozhye, Lenin's Prospect in the region of Minor Marketplace. 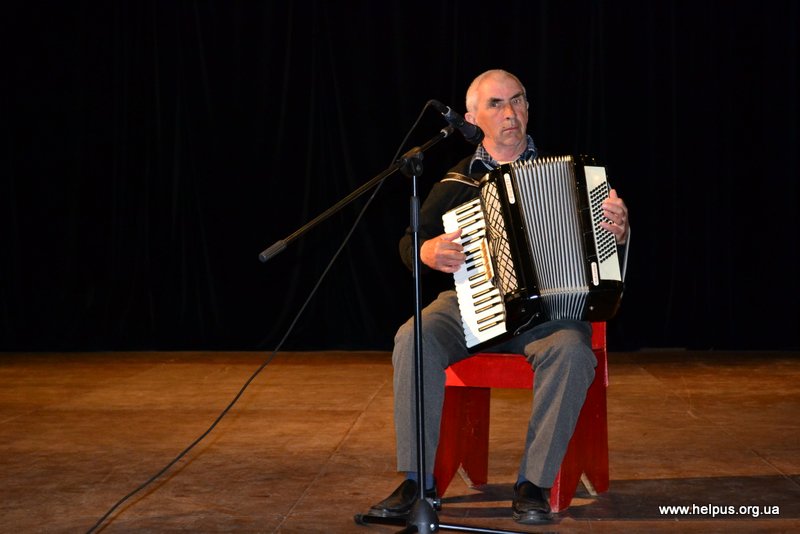 Four young ladies from the Kirovo Group Home performed a wonderful dance named "Ukraine", and Vyacheslav Sukhenko from Orlovo amused the audience with a humorous poem about a Russian singer Angelica Varum. Besides, Vyacheslav knows quite a few songs, and is always happy to sing them, accompanied by the guitar. 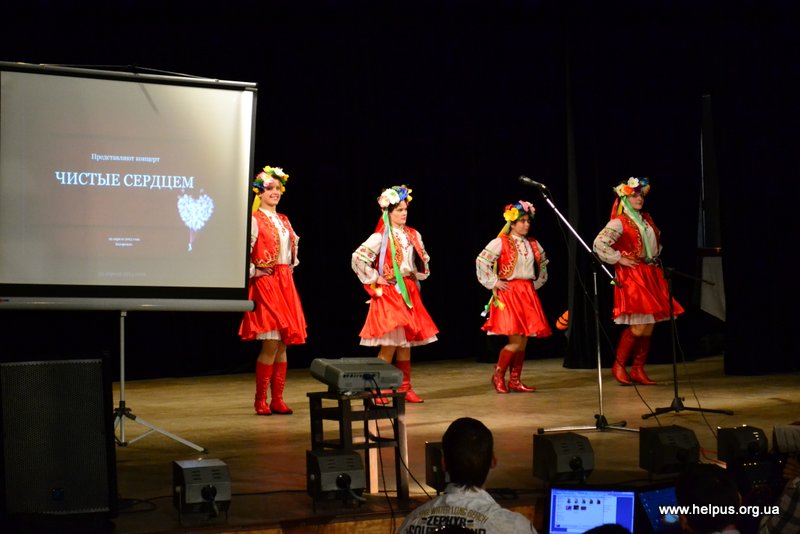 The dance performed by the young ladies from Kirovo Group Home

For the next number, the person who took the stage has put not only his voice, but his music into the songs. The composer Dmitriy Ostapenko, who performed his romance "Victoria", amazed everyone with his sincerity and poignancy. Dmitriy has graduated from the Culture Institute, and can write ten songs in one night. 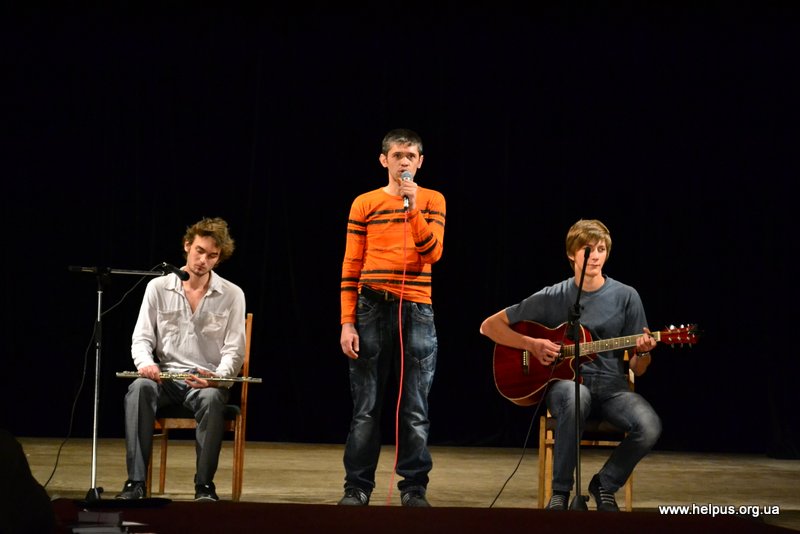 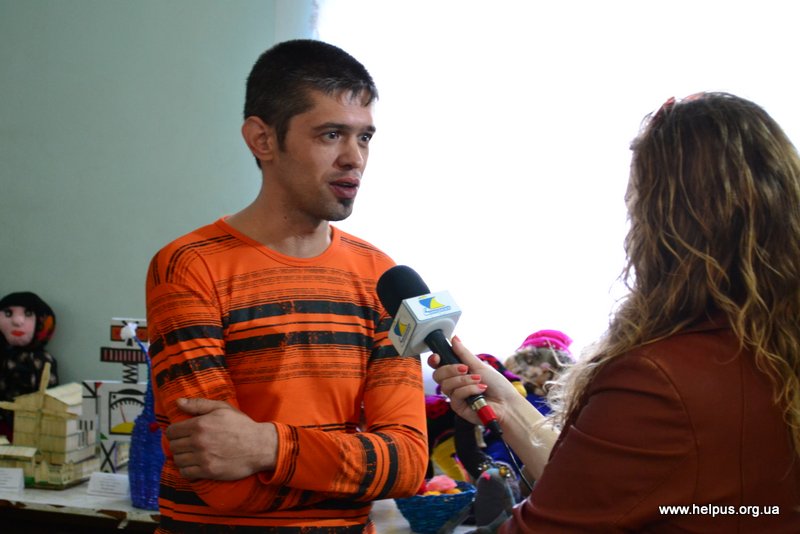 In the final number, to loud applause of the audience, all performers together sang “Closing the Circle". 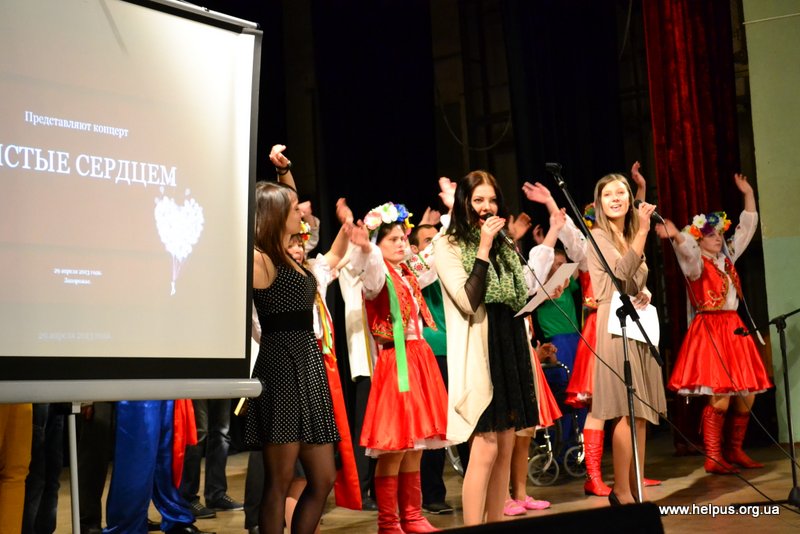 The final number - the song "Closing the Circle"

This is our first time organizing such an event; therefore, we had many concerns. Despite our concerns, the concert was a success and brought joy both to participants and to the audience. It is obvious that we must organize such events more often, because, as Democritus had once remarked, "Life without festivity is like a long road without an inn."

Finally, we'd like to mention those who have put in a great deal of effort so that this concert would take place. They are Alina Kuznetsova, Katya Magnitskaya, and Oleg Batyrinskiy. Many thanks to the three of you!

P.S. If you want to help us organize traveling mini-concerts in our region's psychoneurologic group homes, write to us! To organize such concerts, we need help in paying for gas, and caring, pure of heart volunteers!

Video clip about the concert on the "Zaporozhye" TV channel:

Video clip about the concert on the "TV-5" TV channel: