Our Humanitarian Trip to Slavyansk

On August 30rd, 2014, together with the church volunteers, we visited Slavyansk and handed over humanitarian aid to the out-migrants with children and to the Slavyansk Psychoneurological Group Home

On August 30rd, 2014, Roman Rakhuba, three more volunteers from the Zaporozhzhye Orthodox churches and I headed to Slavyansk.

We did not leave empty-handed. We had loaded up our minivan with children's and adult diapers, baby food and formula, which had been purchased by the "The Golden Century" jewelry factory, and non-perishable foods, which the churches had collected. We had also purchased medications needed for the Slavyansk Psychoneurological Group Home. Altogether, we were bringing aid worth more than

10, 000 hryvnyas (734 US dollars), but of course that is merely a drop in the ocean compared to everything that is needed. The goal of our trip was not only to handover the aid ourselves; we also wanted to see firsthand what the residents of the newly freed cities need, and to determine our further plan of action.

We left for our destination in the early morning. The magnificent sunrise and the clouds slowly moving along in the blue sky made it difficult to believe that there was a war going on very close by, and that the people were killing each other.

Our first stop was in the town of Dobropolye of the Donetsk Region. This town had been taken over by the Ukrainian army almost immediately, and, therefore, it didn't sustain any damage. Nonetheless, the town has a major problem with housing the out-migrants. Vadim from the local Russian Orthodox church, showed us an abandoned school in the village of Verovka, not far from Dobropolye, in which in the next few days around 200 displaced persons would be housed. So far, the school has no heat and no indoor plumbing, and there is a shortage of beds and bed linens. Despite that, Vadim and his helpers believe that they will be able to resolve all these problems with God's help and with the help of kind people. If anybody wants to help Vadim, let us know and we will give you his contact information. 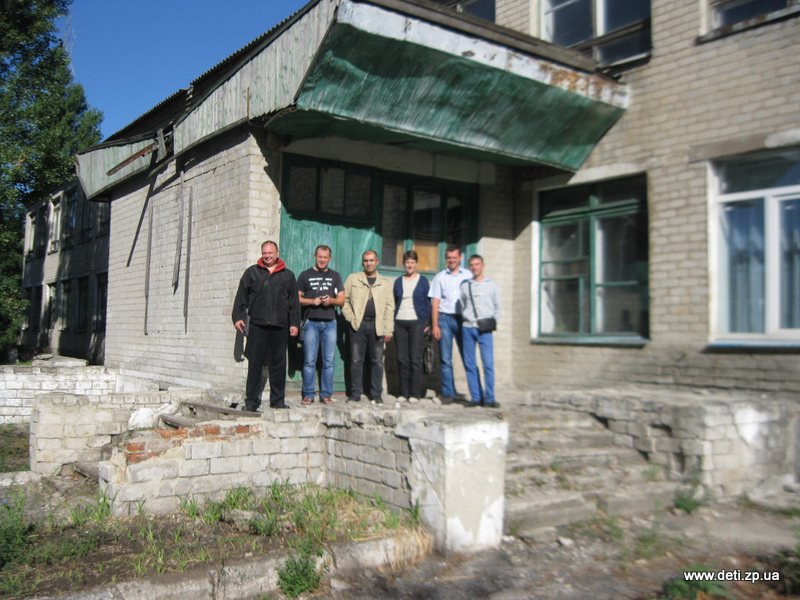 In the village of Verovka near Dobropolye, in an abandoned school building, 200 displaced persons from the conflict zone will be housed 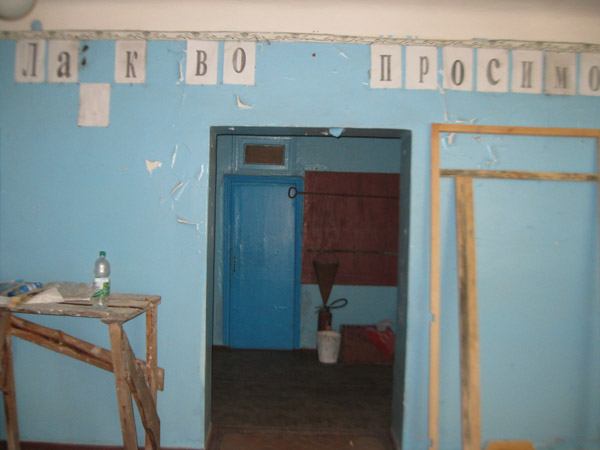 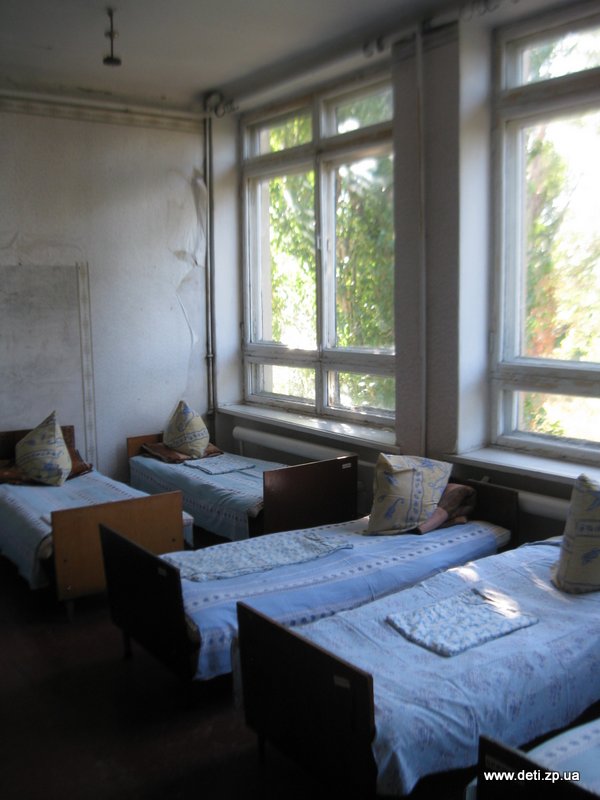 To help with housing these out-migrants, food, beds, linens, and portable heaters are urgently needed

Then our travels proceeded through the cities of Krasnoarmeisk and Kramatorsk into Slavyansk. Kramatorsk didn't seem to have sustained any damage from the fighting. Only in one of the buildings we saw severe damage on the 9th floor. That building was actively being repaired, with the construction crane in action.

Soon, we entered Slavyansk. The checkpoints here are the most highly reinforced ones, and the inspection is more thorough. To be honest, from having seen the news on TV and photos on the internet, I believed Slavyansk to be a completely demolished city. Thankfully, that was far from the truth. Some areas of the city have practically no damage. People, including many mothers with young children, are peacefully strolling through the streets. The bridges are painted with the colors of the Ukrainian flag, and the billboards display signs such as "Slavyansk is Ukraine" and "Thank you to the Ukrainian Army for freeing Slavyansk".

At the same time, in the area of the city where the psychiatric hospital and Semyonovka are located, practically every house is damaged. 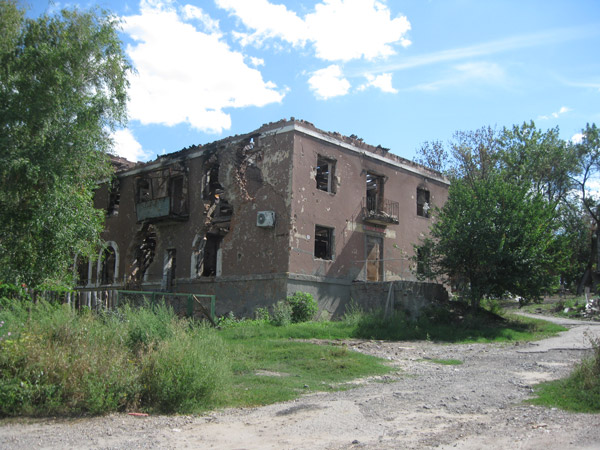 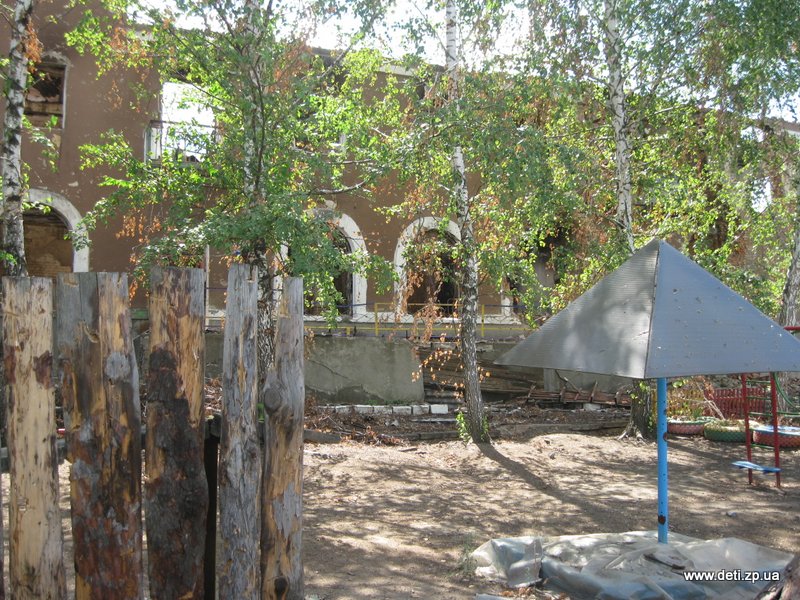 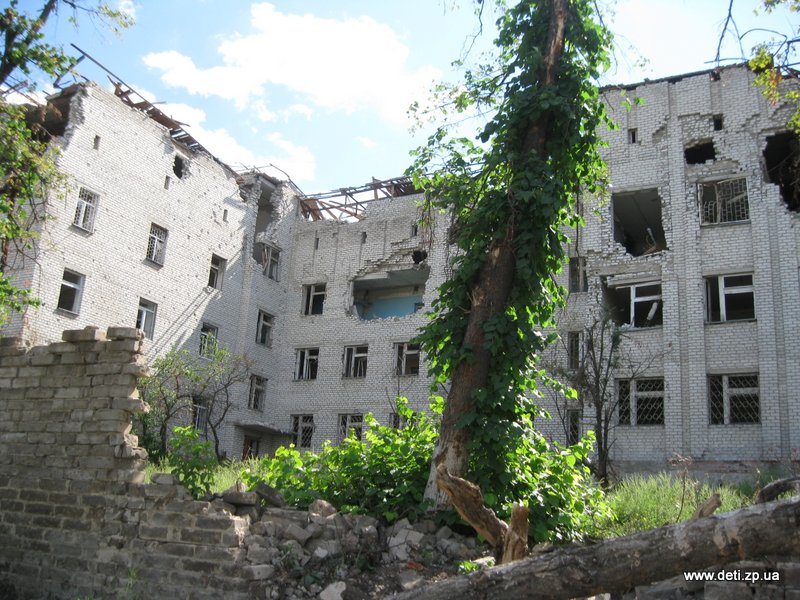 The building of the Slavyansk Psychiatric Hospital is almost completely destroyed 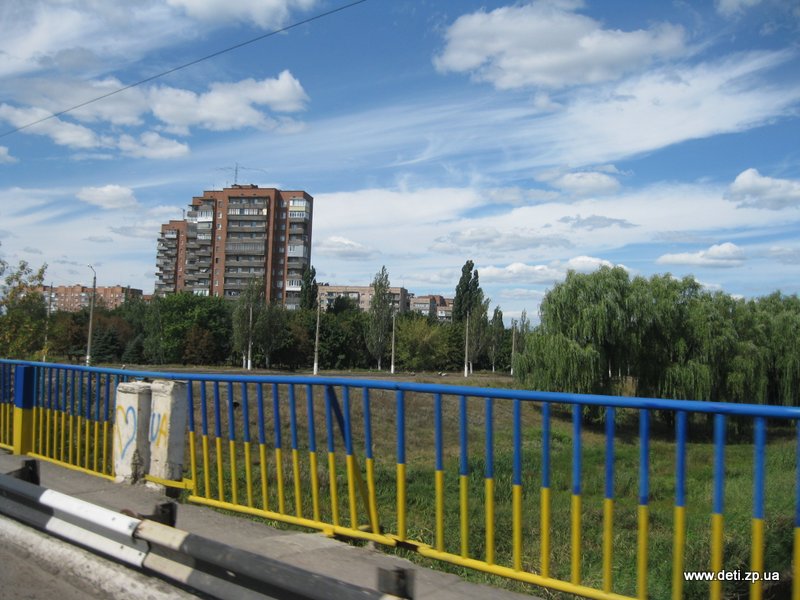 A bridge in Slavyansk 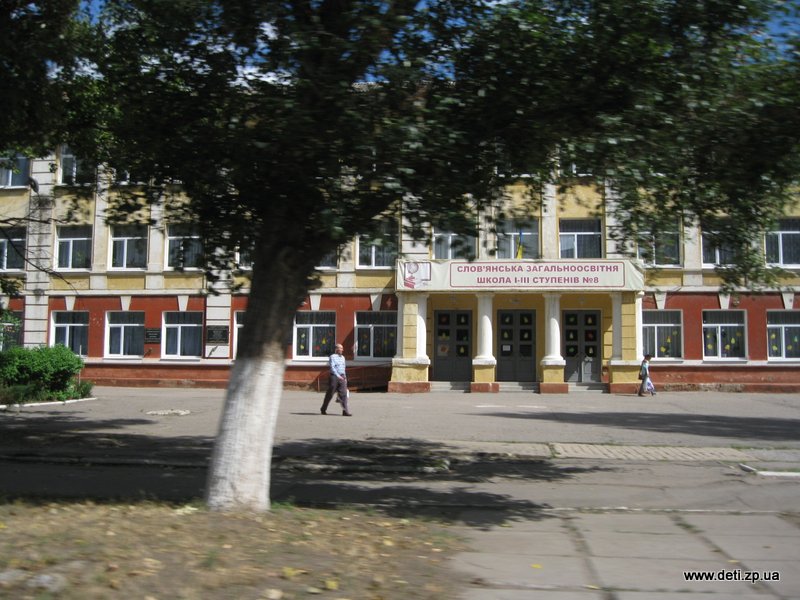 While in Slavyansk, we visited their women's psychoneurological group home. The group home has space to house 300 residents, but because of those who had to be moved in from other group homes, it currently houses 600 women. The place is horribly crowded, and many women have to sleep in the hallways and the lobbies. Frankly, I was unable to understand why those unfortunate women couldn't be moved to the group homes of other adjacent regions. Overall, the group home sustained hardly any damage from the shelling (only one shell struck a supply shed), and the residents were evacuated to other group homes during the time when active fighting took place. 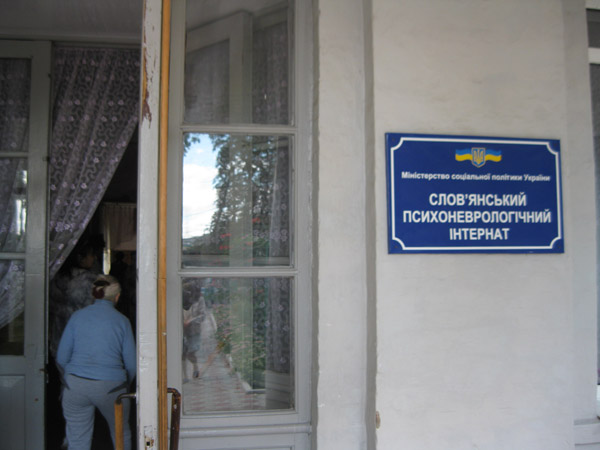 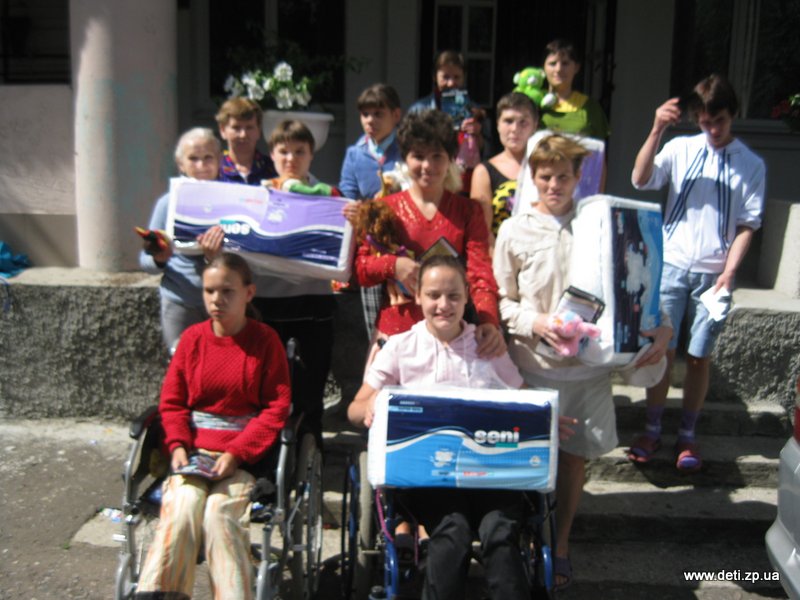 The residents of the group home received supplies worth more than 5,000 hryvnyas ( 387 US dollars) - diapers, medications, personal hygiene supplies

After visiting the group home, we headed to the "Good News" church, where we met with Petr Dudnik. Amazingly, the huge building with the 700-seat hall was not at all damaged as a result of the fighting--despite the fact that the separatists were shooting at the Ukrainian army from there.

Since the time active fighting began, Petr and his team have been busy helping those who suffered from the war. They daily transport dozens and hundreds of people out of the war zone, help with expenses and even completely cover the expenses of the refugee camps, repair the damaged houses. Help comes from many countries, and thousands of people have responded to the appeals - but even all that help is not enough. There is a constant shortage of food, clothing, construction materials, and housing for people who had to leave the war zone. Those who want to help Petr and his team can contact him directly via his Facebook page. 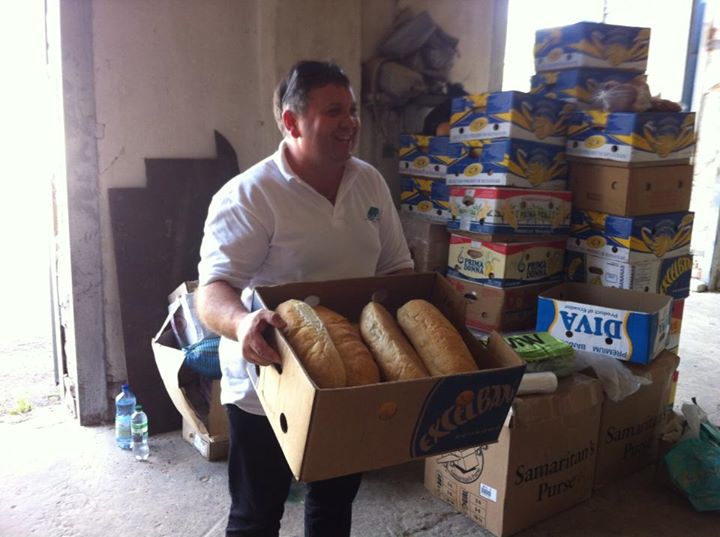 Petr Dudnik and his team carry out a huge volume of work - they transport people out of the war zone, repair the housing, help the refugee camps 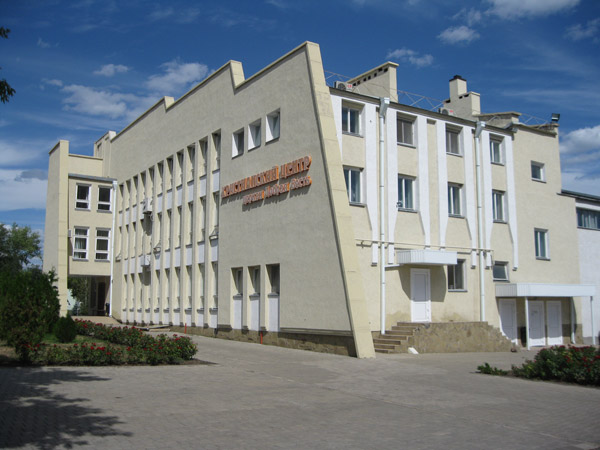 The church "Good News" wasn't damaged, despite the fact that weapons were being fired from its location at the Ukrainian army 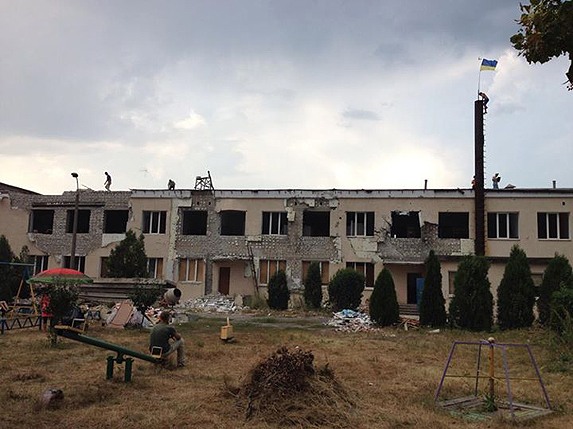 The building of the group home "Sails of Hope" was significantly damaged. Now it is being actively restored. You can help via the group "Restoring the 'Sails of Hope'"

After our meeting with Petr Dudnik, we headed to one of the displaced persons camps near Slavyansk, next to the village of Schurovo. More than 200 displaced persons are currently living there. We handed over food and children's diapers, and chatted with these people as well. Naturally, the majority of them are concerned about the coming cold season and about their future fate. Every day, it grows more and more difficult to be living with children in a summer camp, but there are no other suitable living arrangements. The out-migrants shared with us their stories; they told us about the shelling of Gorlovka and other cities. Some were active supporters of Ukraine, and others were firmly convinced that it was actually Ukrainian army who was firing missiles at civilians. 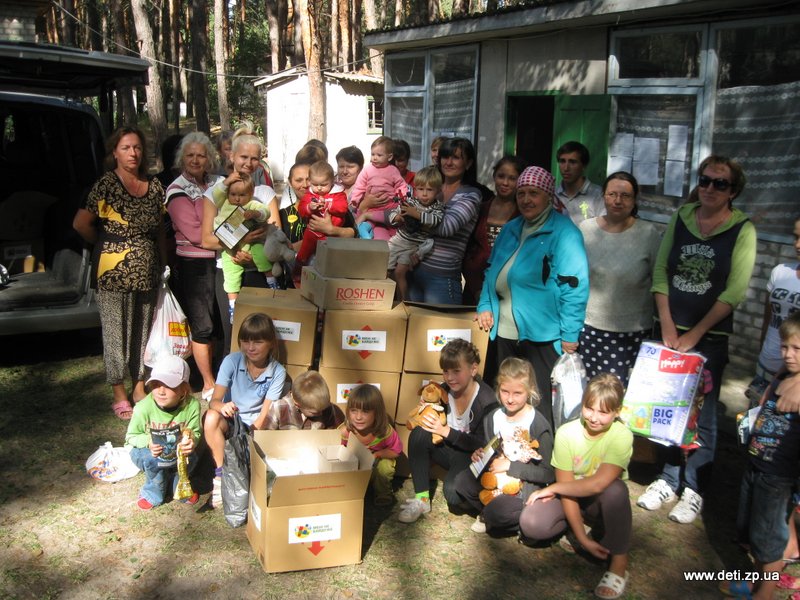 The displaced person in the camp in Schurovo near Slavyansk appreciate the help but are concerned about their future fate. The camp is not heated, and it is unclear where they can live as it gets colder 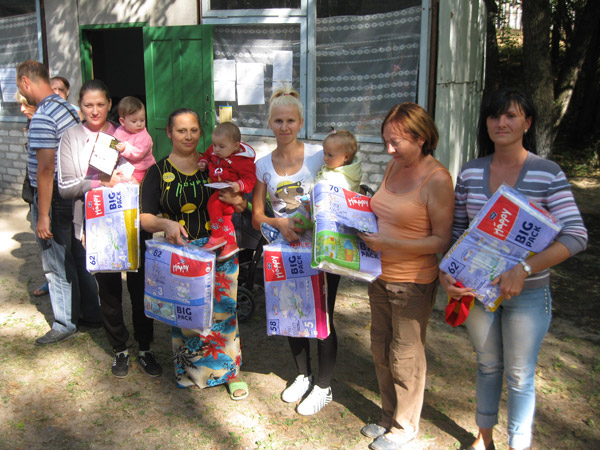 After the Schurovo camp, I decided to ride the minibus to Donetsk. I will write about what I saw there in my next article.

Summing up the trip, I can say the following:

-the main problem in the freed-up areas, just as in all of Ukraine are the food and living arrangements for the displaced persons. Therefore, once again, we ask both private individuals and government organizations of all areas of Ukraine - please inform the foundations and the refugees' aid centers that work with the emergency services about the availability of any free living quarters. Many people are willing to relocate to any area of Ukraine and even to the rural areas - as long as they would have a roof over their head and would be able to spend the winter.

-hundreds of houses were damaged from the missiles in Slavyansk and the surrounding areas. All these buildings need to be repaired or rebuilt. The contact information of the specific families whose homes were damaged can be obtained from Petr Dudnik.

And if one looks at the ultimate source of the problem, one can only conclude that the entire society needs to look for ways out of this crisis. There needs to be a cease-fire effective immediately, and only after that can the diplomatic talks begin. One begins to understand that especially clearly only after having been to the conflict zone.

The government of Ukraine must talk to people, especially to those who believe that it's the Ukrainian army who's firing at the peaceful cities. These facts must be sorted out. If the fire comes from the direction of the "Donetsk People's Republic", then proofs must be provided. People live in ignorance and simply do not know who is firing at them. If it's the Ukrainian forces who are firing, then why is there such destruction even of the houses in which there were no separatists/insurgents?

Another very important issue is safe transport of civilians through the humanitarian corridors. At this time, entering or exiting Gorlovka, Lugansk, Donetsk, and other cities is a lottery, and the price can be your life. I saw it for myself when I entered Donetsk under fire. Lives of people in a bus are never safe. The death of a group of out-migrants near Lugansk is proof enough of that.

In any situation, the "Happy Child" foundation is not going to distance itself from our common trouble.

Most of all, we want to focus on helping the multiple children families and the low-income families with obtaining the necessary medications, food, and clothing, and also with finding housing. We've been doing all that for about a month already, but we are catastrophically short of funds and supplies.

We appeal to all our readers not to distance themselves from the problem, and not to think that the residents of Donetsk are themselves to blame for what has happened. We ask that, without condemning anybody, you show mercy and bring foodstuffs (grains, vegetables, fruit, canned foods, sugar, flour) to our foundation's office on weekdays, between 10 00 and 18 00 (city of Zaporozhzhye, Gryaznov Street, House #4, Apt. #36)

Those people who know of available autumn and winter housing for out-migrants, we request that you pass on that information to us.

Additionally, you can help from anywhere in the world, by donating some money, using whichever method is convenient for you -

Just as always during the 10 years we've been open, we provide full information about the collected donations and expenses

This publication related with such categories:
Charity  News about Support Out Migrants  Publications made by Happy Child, Ukraine