Fundraising is closed! Parents are yet to cope on their own. Like any new need - we 'll talk about it. 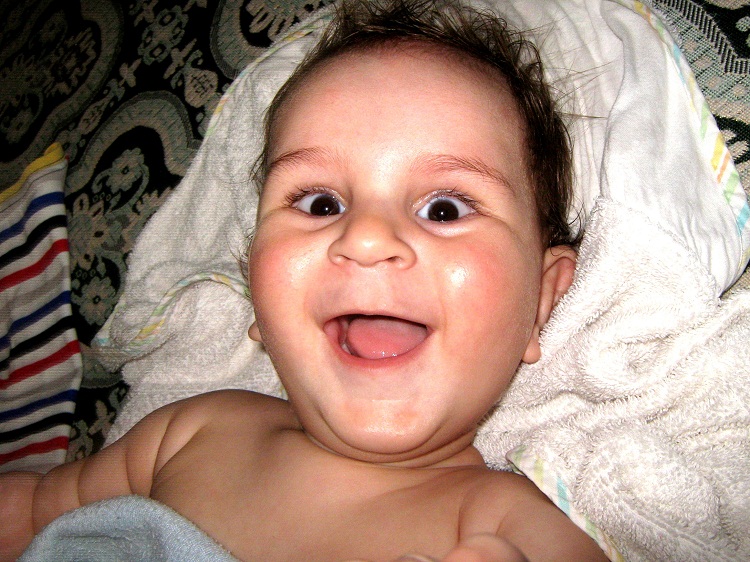 Parents are yet to cope on their own. Like any new need - we 'll talk about it.

My name is Tatiana. I would like to tell you the story of a wonderful little boy, our son Eugeniy. This story began two and a half years ago...

I had made several unsuccessful attempts to get pregnant and was already starting to think of adopting, but the Lord is merciful! And the women's clinic doctor told us what we'd been long hoping to hear: "You're PREGNANT!" Our joy was without bounds. My husband and I were in the seventh heaven. Flowers, hugs, choosing the child's name, plans for the future and the unbearable wish to soon meet the little person who already exists and is living underneath my own heart.

But our happiness did not last long - the diagnosis "threatened miscarriage" forced me to move from Berdyansk to a village near Zaporozhzhye and get admitted to the hospital in Volnyansk. It was a difficult pregnancy, and therefore, I went to give birth to the L&D hospital #5 in Zaporozhzhye. Persistent pain and the fear of losing the pregnancy were made worse by having to live apart from my dear husband. He was living and working in Berdyansk. All the money he was earning was spent on preserving the pregnancy...

At 19 weeks, my husband and I heard good news at the ultrasound: we were going to have a SON! But even here the happiness dissolved into tears - there was a suspicion that the child might have Down syndrome. The amniocentesis confirmed the ultrasound findings. The repeat ultrasound also confirmed the diagnosis. The doctors repeatedly insisted on terminating the pregnancy. We were fighting for our son and reading on the internet about the diagnosis... Our life seemed like a terrible nightmare! What should we do and how should we act? We already loved him and definitely decided to continue with the pregnancy, partially even resigning ourselves to the fact that he would be a special child.

Finally, a trip to Kiev to the "Okhmatdet" clinic, the specialists' examinations and another ultrasound disproved the previously established diagnosis. The repeated examination in Kiev and a repeated ultrasound also did not confirm the frightening diagnosis of Down's syndrome. We were happy, but these lengthy trips, stress, and worry had an adverse effect on the pregnancy and I had to be re-admitted to the hospital. And that's how it went for the entire length of the pregnancy, after week 8...

9th month, at last! I was staying at the L&D hospital #5 for the last two weeks of the pregnancy...Here started contractions...Four days straight...I was so tired, vomiting, pain, and no strength left. How could I give birth? And the baby stopped moving. On the ultrasound, they said the baby had tachycardia. By morning, they pierced the amniotic sac. Here was labor, baby, we were at the FINISH! We were going to make it!...Difficult labor!!! My husband came to be with me. We had hoped that he would be the one to cut the cord and the first one to hold our son. But the cord wrapped around the baby's neck, his getting stuck in the birth canal because of the lack of contractions, pulling him out and the doctors' attempts to save the child disrupted all our plans. The baby was born blue, not breathing, not crying. The doctors resuscitated him and his first cries sounded in the delivery room. 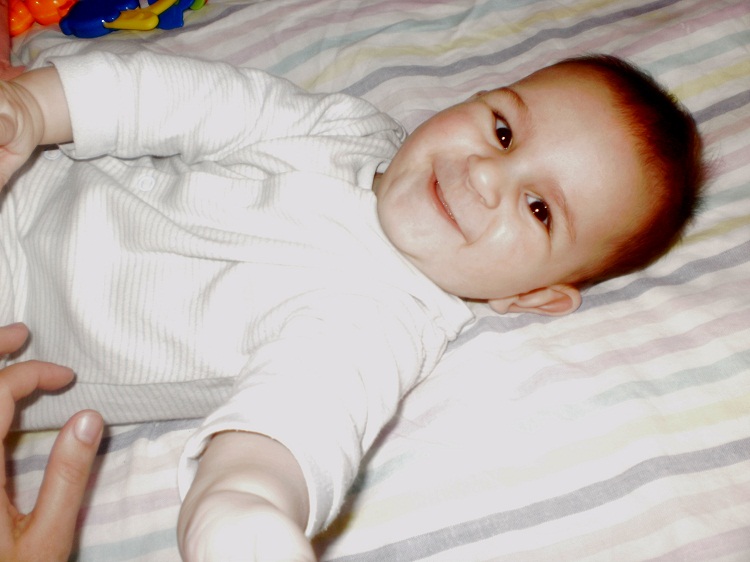 Oh, what happiness it is to see your child born into this world! It is a truly miraculous moment, which one can never forget. July 26, 2012 - a long-awaited date. We thought all our troubles were finally over: the difficult pregnancy, the frightening diagnosis. Our son had been born and now everything is all right. But alas...our tribulations were not over...

On the second day, Eugeniy's condition worsened: frequent vomiting since the time of birth, up to 9 times an hour, and fever of 38C. The baby lost 400 grams of weight in 24 hours. We got moved to the hospital's neonatology unit. Endless labwork, examinations, X-rays, ultrasounds, shots, multiple new medications didn’t yield the desired result. His condition was not improving.

On the 11th day, I started hemorrhaging (acute endometritis). I was then admitted to the hospital, where they fought for my life all night. IVs, shots, the faces of the doctors and the nurses - everything was blending together and floating in front of my eyes. Thanks to the staff of the gynecology unit - on August 7th, exactly on our anniversary, my husband and child got a gift - I was alive!

It was very difficult for me to spend three weeks without my son. He was in the regional Children's hospital, and I was in another hospital getting IV antibiotics. I had a persistent sense of anxiety. My son was discharged three days before I was. We were together once again, but not for long. Four days later, because of severe vomiting, he got admitted to the hospital again.

A week later, I suddenly became unable to walk. My husband spent three weeks in the hospital with us, until I felt better and was once again able to move around and take care of the baby. Meanwhile, there was more labwork, ultrasounds, X-rays, shots, every possible test, endless lists of medications. Even endoscopy didn't result in anything except for complications from general anesthesia.

We got discharged home. We went to see a chiropractor, who examined Eugeniy and discovered a subluxation in the cervical and lumbar spine, and dislocations of shoulder and hip. First session with the chiropractor and the first night without screaming. Six more sessions and our boy stopped vomiting. And we'd spent four months of suffering... We were much better, but the problems weren't over. The difficult labor had an effect on little Eugeniy's central nervous system. BIRTH TRAUMA...

Altogether, all this saga lasted about 7-8 months and we spent a total of 62, 000 hryvnyas (2,214 US dollars). Our parents, colleagues, relatives, and church members helped. We thank God and thank all the people who helped us, including the "Happy Child" Foundation. The baby was improving every day. He was meeting all the developmental milestones, and was even ahead of some of his peers. He started talking early, became quiet and calm. He could spend hours sitting playing with toy cars, shoelaces, other small toys. BY HIMSELF. While he did that, I was able to cook, clean, and take care of other household matters. The only problem we had was him not sleeping at night. I made him herbal infusions, the doctor prescribed medications. He still wouldn't sleep...

At 18 months of age, he began to have temper tantrums. We noted abnormal behavior:

-stopped responding to his name

-plays with gnats and dust

-avoids other children and adults (I thought he was just shy)

-terrible temper tantrums: loud, unbearable screaming in a high-pitched voice, occurring for reasons we couldn't figure out, up to 9 times an hour. They could last up to 5 hours each (without stopping).

-hitting himself, sometimes to the point of bleeding, scratches, and bumps

-during those times, he does not respond to us, doesn't seem to see or hear us

Our pediatrician referred us to a psychiatrist. And that's where my husband and I first heard - AUTISM, THERE'S NO DOUBT ABOUT IT!!!

We felt like the ground dissolved under our feet. The film "Rain Man" immediately came to mind. We didn't want such a fate for Eugeniy (living in a specialized group home, because some people with autism are not able to live independently).

We signed up on a waiting list for daycare for special children, which starts at age 3. In this daycare, psychologists, speech therapists, and physical therapists work with the children. But we cannot wait a year, because AUTISM is an incurable disorder, which is manifested in the child's abnormal behavior. The child has a different perception of reality. Autism is incurable, it's for life, but it is possible to teach a child with autism how to adapt to reality. And it is very important to start teaching this when the child is of preschool age, which can enable our child to be a FULLY-FUNCTIONING, INDEPENDENT member of society and almost completely eliminate the external signs and symptoms of autism.

The scientists abroad have made great strides in diagnosing autism and helping autistic children adapt to reality. There are certified specialists here in Ukraine as well, who have used the ABA method for many years with good results.

Since August 2015, we have been undergoing ABA therapy with the specialists of "Dialogue" center and have already accomplished a few things: Eugeniy is learning to take care of himself (he washes his face, is learning to dress himself and to use the bathroom, he feeds himself, and answers to his name), there are fewer temper tantrums. But the adaptation process is lengthy and expensive; it is necessary to see a psychologist 1-2 times every 2 weeks, to attend seminars, and to take Eugeniy for therapy sessions at the center.

We place a great deal of hope in the ABA therapy methods, which will help Eugeniy adapt to reality, to improve his self-control and to acquire new skills - from everyday to the academic. But we can't handle this problem using our own means.

Since Eugeniy's birth, we had a second (healthy) child, a little girl. We are living on my husband's small salary; we had to leave our home in the city of Berdyansk and to move to a village near the city of Zaporozhzhye. Eugeniy doesn't receive any federal aid (all these aid programs for disabled children or low-income families have been cut). We do get a minimal amount of aid for our daughter Lera, but that money can barely pay for the absolute necessities. We greatly need help of caring people. Even 1 dollar can make a big difference. Please, do not be indifferent to our plight.

This publication related with such categories:
Publications made by Happy Child, Ukraine        News about Eugene Krylov