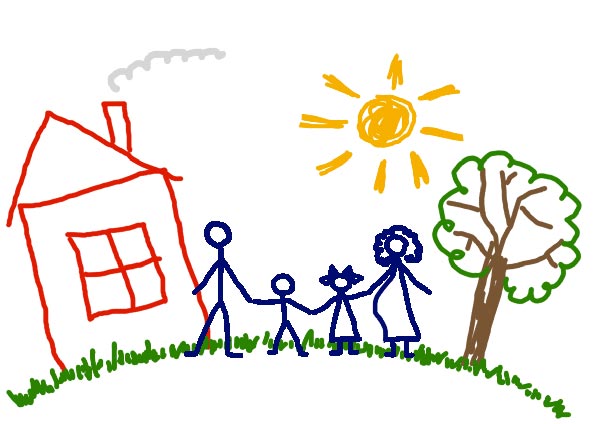 There are about 20 thousand orphans raised in Ukrainian orphanages and boarding schools.

Have you ever thought what stands behind those words and numbers? Eight years ago, while delivering lectures in Zaporizhzhia Law Institute of the Ministry of Internal Affairs of Ukraine, for the first time in my life I saw what an orphanage was. It was decided that departments of our Institute would have a new “patronage” duty – to visit children staying at one of Zapizhzhia orphanages and organize holiday celebrations for them sometimes. I will never forget our first visit – it was a ceremony dedicated to the beginning of a new school year. The ceremony was similar to many others at any other city school, with just one difference – the children were standing there in shabby rumble clothes, and there were no parents next to them. A world of children no one needs was something really terrible to observe.

Then for several years all our department staff came to the orphanage during holiday time. The procedure was pretty standard and included cakes, soda, and presents for children; drawings, poems, and songs for us. Tacky corridors and classrooms, torn towels hanging on the walls, children in rags... And every time they ran to give us a hug trying to tell us something: about their Dad who killed Mommy with an axe but who will soon be released from jail; about their Mom who lives far away, in Crimea, that is why she cannot come and take them away from the orphanage, but if she lived not so far she would definitely come; about another Mommy who drinks vodka, but will soon get over it and will take them away from the orphanage.

And their teachers told us different stories: about the children smoking, begging on Metallurgov Avenue, stealing things, lying…

And we, well-educated grown-ups, could not understand why they acted like that and how we could help them. Just greet them on holidays, go away to our homes and try to forget. Anyway, there was nothing we could do. They had their own lives and we had ours.

In the recent years there has been a considerable improvement in the well-being of orphanage facilities. Almost all the premises have been renovated. Not every family can afford to buy the clothes orphanage children wear. Meals are also good.

But children are the same. They make drawings for their visitors, run to give them a hug and tell them stories about their parents, who will very soon get over their alcohol dependency and will take them away, steal and lie… I ask an orphanage worker: “Why do they act like that? And what future awaits such children?” – “No future, - she says. - The ones to blame are their parents who give birth to children no one needs. In the orphanage we give them everything , but they are just like that. There is nothing to be done.”

My colleagues still melt looking at the drawings children make for their “dear visitors”. Several years will pass and many of the boys will serve their terms in prisons, while many girls will bring their own children to orphanages. Why are we pretending we do not know it?

“These children are consumers, they are not interested in anything, and only want to have fun, they do not have any ambitions”, - I heard it from both orphanage workers and NGO representatives. Many people want to help them, but for some reason there is no good from this help. Even the apartments the government once started providing to orphanage alumni were as a rule wasted in vain.

“They go crazy because no one needs them”, - explained such behavior of “municipal” children one girl from the orphanage.

The Happy Child Foundation received an application from a family who wanted to take a foster child whose profile was placed on our website. But today their wish may not be fulfilled as they have already made one try to create a foster family. They took a girl and a boy. After the children started living in the family, the boy was diagnosed with a mental disease. Foster parents were not ready to accept unpredictable attacks of aggression the boy was experiencing as, apart from him, there were four more small children in the family: three sons of their own and a foster daughter, the native sister of the mentally disabled boy. There were a lot of efforts, a lot of emotions, but finally both children had to leave the family as they could not be divided, being siblings.

The married couple still wants to give an orphan home and an opportunity to be a full member of society. This decision was taken long ago and it is based on deep personal grounds. Nevertheless, they were refused to try creating a foster family for the second time.

It is a challenging situation with many hidden rocks, but the main thing is that there is a little one who suffers in an orphanage and there is a family ready to accept him. So we just have to make it clear for ourselves if they can be happy together.

The family lives in a private house in one of the towns located in a neighboring region. The couple has three children of their own, with the youngest baby (who was born after the attempt of foster family creation) being just twelve months old. The father is a miner and the mother works as a nurse in a local cancer treatment clinic. They used to live in a one-room apartment, but recently bought an old shabby house that is being now renovated little by little. Beautiful and well-kept dogs – Russian wolfhounds, Italian greyhounds, Yorkshire terriers – are their hobby and a considerable category of family income.

I spent only one day with this family but could from the very beginning feel that there is a warm and loving atmosphere in their home. Despite of what we think of ourselves, our children characterize us best. So only the view of lively, smiling, and self-confident boys of ten, five and one year old demonstrates the love and care of their parents better than any psychological tests.

All the people who know this family – their neighbors, school teachers, kindergarten instructors – give only positive feedback about its members. Honest, hard-working, open-minded people - in such a small town like this makes it hard to conceal anything. And only government officials see them as greedy, irresponsible, and scandalous citizens, almost criminals, who wanted to “make hay” on the poor orphans, making the state take care of them.

Unfortunately, this problem is not new. Talking to people working in various governmental institutions and orphanages, I hear that people take children and create foster families to receive allowances from the state so often that I realize – these people really believe it is true. One of the workers of the Department for Children can’t keep her emotions: “And you, if you decided to take a child to your family, would you adopt him or would you create a foster family instead? Don’t you understand that such families are formed for the sake of money? They do not care about children!”

Me, I do not believe it. I think that such foster families are an effective, modern, and progressive institute allowing to solve the problem of social orphanhood. The legal mechanism of such facilities creation and operation protects the rights of both parents and children.

Forster parents are people who decide to make a very important and responsible step in their lives – to open their home to a child who suffered from violence and abuse in his own family and then lived in cold and depersonalized atmosphere of an orphanage facility.

Foster families give an opportunity to foster parents to get assistance from the state, that is financial support, but what is even more important – support of relevant officers, psychologists, and social workers. The fact is that the expectations of foster parents to melt the heart of an orphan with their love and care often fail. The behavior of foster children often baffles their new parents: they lie, steal, manipulate, and, despite all the efforts of adults, do not demonstrate any particular joy from the fact that they now live in a family.

A professional psychologist is the one to help reaching mutual understanding and developing the right approach to a foster child for the new family to become a real cozy home for such a child.

On the other side, the institute of foster families protects the rights of an orphan, preserving transparency in the relations between the foster family and the child. In simple terms, in contrast to adoption, here there is an opportunity to make sure that foster parents do not offend the orphan.

Unfortunately, the heroes of our story did not receive any adequate assistance and support from social services, but at the same time heard a lot of unfair accusations. Surely, most workers of such services perform their functions adequately and do help families. Nevertheless, such a situation is not an exception, and foster families often face disapproval and suspicion from the side of public officers.

I have a whole lot of documents showing the complicated relations of our heroes with governmental facilities. The couple may file a lawsuit in court to defend their right to take another foster child to their family.

But I do hope that this situation will be solved amicably and everything will be fine. I mean, there is a good and friendly family. And there is a child who feels bad in his orphanage. And we will surely tell our readers if they are going to be happy together.

I have hard feelings, hearing this story. On the one side, a sick child, in particular the one having mental disability needs a family no less than any other. On the other side, not every family is ready for such a challenge. And it should be taken into consideration: it is important that finally both the child and the foster family benefit from being together and are happy. After all, not only orphans have their rights, other people do, too. And there is another important aspect. In many countries such system of orphans’ adaptation exists for a long time, and foster parents there are equal members of the team working with a child. And in our country we have the situation when foster family is one thing, and social welfare services are quite another thing. As a result, sometimes we see a picture when government officials stand against the family, if foster parents “bother” them. The fact is that the Savelyev family, feeling that they were incompetent in the existing circumstances, constantly asked for help and support, but instead they got only misunderstanding and accusations. At the same time, of course it is easy to judge social workers, but they themselves do not always possess proper knowledge and resources, meanwhile having high responsibility. Thus, it turns out that someone has to be blamed. And before accusing foster parents and telling they are greedy, I would offer one to answer a question: Would you like to open your home to someone else’s child with difficult behavior, take care of and be responsible for him, enduring the inspections of various governmental facilities, doing all this to get some extra money.

This publication related with such categories:
Orphanhood prevention    Foster families    Adoption orphans from Ukraine  Publications made by Happy Child, Ukraine