From Ukraine to Sidney: Woman’s life path leads her to volunteering in area

During her time in Sidney, Egly has worked with several different programs including the Boys and Girls Club of Richland County, Meals on Wheels, RSVP, and serving at the Rchland County Health Department. 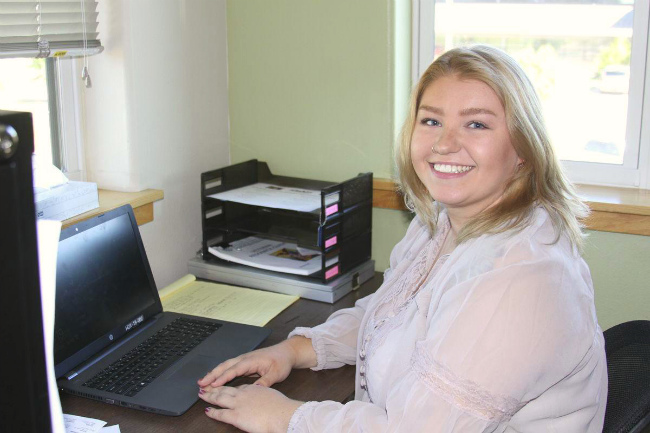 (Editor’s note: The following is part of a series featuring the AmeriCorps’ members in Richland County)

Since the beginning of November, Sidney has been home to 22-year-old AmeriCorps member Katya Egly.

During her time in Sidney, Egly has worked with several different programs including the Boys and Girls Club of Richland County, Meals on Wheels, RSVP, and serving at the Rchland County Health Department. While Egly moved to Sidney from Virginia, she was born and lived in Zytomyr, Ukraine.

Egly said that she got involved in AmeriCorps after a friend told her about it. “That’s something I’ve always been interested in; making communities stronger,” smiled Egly. During her time working with the Boys and Grils Club, Egly focused on the Food Backpack Program.

This program provides food to children who may not be getting enough to eat at home for any reason. Egly was responsible for helping pack the bags for the children to take home with them over the weekend.

Egly said that helping out for the RSVP appreciation day was special to her. “I got to help create a speech for Rita [Jacobson],” Egly said smiling. Her vibrant personality and positive attitude radiated into her story telling.

Having had a rough start to life the way Egly did can send people down many different paths. But Egly chose a path of volunteering and helping people when she can. Coming from a home of abuse, when Egly was young, her sister had her placed in an orphanage to get her out of the abusive home setting.

Egly told the story of what it was like growing up in an orphanage. “We ate cabbage and black tea, with nothing in it.” She went on to add that until she came to the U.S. she hadn’t had sugar and even hated the taste of sweets. “That’s changed though,” laughed Egly.

She noted that her friend Vasya helped her to learn English. “It only took me three months to learn English,” said Egly. She went on to explain that she was adopted at the age of 8. That’s when she came to the U.S.

Egly is focusing her attention on the volunteerism aspect of things as well as outreach programs. Recently the Richland County Health Department hosted a free luncheon where Egly helped out, as a way to reach out and find new volunteers for their different Action Groups. “I wear many different hats,” said Egly.

During her time here she has also helped with a bake sale for the spring vendor show as well as being a part of a transitional group and discussion group at Lonsdale church. “Mel was so helpful and I’m sad to see her go,” Egly said of Pastor Melanie Martin-Dent leaving the church.

When asked what she enjoyed the most about being an AmeriCorps member, Egly said, “Meeting new people and doing something new.”

She went on to add that it’s nice to not just sit at a desk doing the same thing day in and day out. This opportunity has her going to all different places she’s never been before and meeting people that she wouldn’t have met otherwise.

Egly was also given the opportunity to give a presentation on Ukraine and the child trafficking issues. She noted the women she presented to were great and she felt like they understood what she was trying to get across to them.

“As a child who grew up in an orphanage you feel like something is missing,” stated Egly.

She went on to add that while she had parents who adopted her she still felt like something was missing.

In an attempt to fill that void, Egly enjoys going to D.C for the Ukrainian festival every year. “I didn’t get to go this year,” she stated. Despite living the majority of her life here in the U.S., Egly tries to keep ties to her true heritage.

This publication related with such categories:
Articles about children with special needs  Publication from mass-media and TV